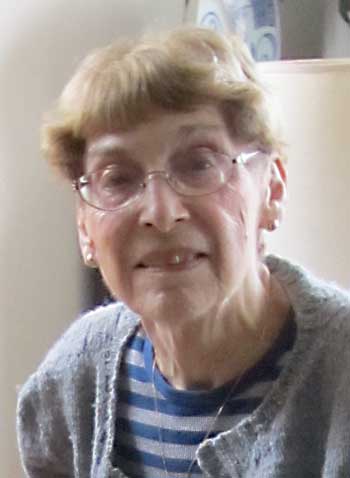 On Nov. 13, 2018, Kay Hogan died of heart failure at Roland Park Place, where she and her husband, Lew Diuguid, had lived for the past 15 months. For the prior 20 years they had lived in Fell’s Point at Belts Landing. Kay was 90 years old.

Kay was born Shirley Ana Kalish to immigrant Polish Jews in Brooklyn. She was a graduate of Hunter College and held a master's degree in Economics from the University of Wisconsin.

Kay's first husband, Edward A. Hogan, died in 1987. He had been country director for U.S. AID in several African and Far Eastern countries. Kay accompanied him and taught in American schools, including one she established in Nairobi, Kenya. When she returned to Washington, she administered a Middle East student-recruitment program for Amideast, a nonprofit supported by AID.

Kay's second husband, Lew Diuguid, was born in Baltimore, graduated from City, VMI and SAIS, started out at The News-Post & American. Lew retired from the Washington Post after spending 35 years at the foreign desk, including three years in Buenos Aires as correspondent for South America. He married Kay and they moved to retirement in Fell’s Point. The community knew him as the Editor of the Fell's Pointer newsletter for nearly two decades, as well as Editor of the Baltimore Gaslight, the newsletter of the Baltimore Historical Society. Kay and Lew lived in Fell's Point for 23 years. The couple would have celebrated their 22nd anniversary this week.

Kay Hogan was President of the Preservation Society and headed its Mother's Day House Tour for a decade, following Romaine Somerville. She also was active in the Residents' Association, the Greenspace Action Partnership aka Friends of Thames St. Park, and was a vocal spokesperson for the community in city hearings regarding proposed real estate developments in the community. The couple both received 9/11 Awards in 2008 and additional awards from the Preservation Society in May, 2017 when she finished her term as President and they moved away.

Kay wanted no funeral and has already been cremated. She did hope for a gathering of friends, which Lew says he hopes to eventually have at Bertha’s.

Some 'Pointer articles about Kay Hogan and Lew Diuguid: